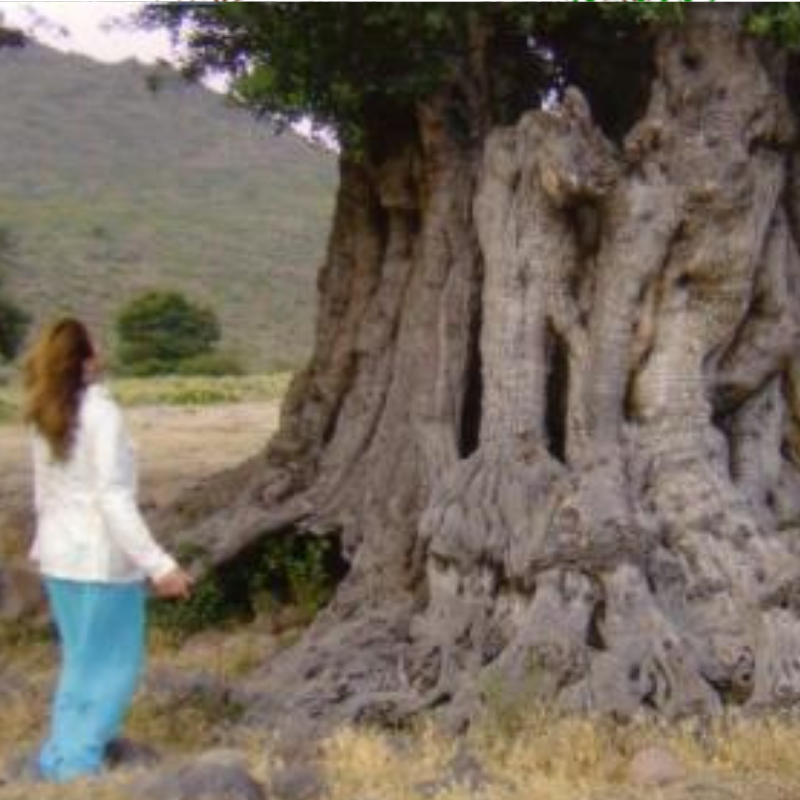 I waited about a year and a half to enter the next VOICING© Training conducted by Pratibha. I had followed her advice and, in the meantime, had started a path of Bioenergetics. It was December 2002, and I felt ready to start that new adventure!
The first great gift happened in the first meeting. Dancing on drum music, I suddenly found my primitive essence connected to the earth. Although being an 'urban animal,' from that moment to today, I can feel my strong belonging to Earth and Nature as a habitat of my untamed and primitive being.
In the next meeting, I began to know my childhood part, my inner child, discovering what film of judgments, insecurities, and needs I was living.
Then I found that there were only two of us, in about thirty groupmates, to say 'No' to each partner in an exercise. It was me and Marga, my dear longtime friend. At that time, a deep friendship was born with her, still alive today more than ever!
When Marga left for India, I started to feel very alone in the group. There were also objective reasons. Participants were younger than me. They were Swiss, German, Norwegian, Finnish, Greek people with other conditionings, other ways to feel or not to feel. But at that time, I hadn't realized that this feeling of being a Martian everywhere was the emotional-affective background I carried inside since I was in the world. During the Training, I felt it more because I didn't have the distractions of everyday life, and I amplified my awareness. Today I can say that I learned to stay in it. This feeling of being a foreigner is a fact; it is one of the many facets of me that I have learned to welcome in compassion and to laugh about it sometimes! Above all, I try not to fall into the trap of separating myself from my neighbor.
I found the meaning of my Sannyas even more clearly and the name 'Prayan' (The innermost journey). New parts of me surfaced in consciousness: a certain austerity and joy. And I felt how much pride there was, and strength. A warrior soul! But also delicate and vulnerable.
The image of me changed significantly.
I continued acupuncture, diet, and I took care of my body, of course. I, who had never felt particularly pretty, had recovered the beauty as a natural state of my female being. I felt emerging a new awareness of my femininity. I walked and stood in my body differently. In hindsight, this was an outstanding achievement because my body was sometimes an ordeal, and because from the beginning of the disease, I  felt it older than the years it had.
I discovered that I often played the victim, and Pratibha shot me many times, teaching me techniques for observing pain.
I understood that I often sought others' attention and approval because I felt insecure, unable to value myself. And I played the victim using illness rather than being that strong and passionate woman centered on her feminine and charisma.
Another big moment, towards the end of the Training, was when I said: 'I no longer want to pretend.' A veil had fallen, and a mask.
I also learned a lot about client work, the language to use, professional ethics, and much more.
At the end of the Training, in the spring of 2006, I felt the urge to give value to my inner child's musical talent.
A new project was looming on the horizon! A project that the French Riviera piano bar singer wouldn't even have dared to imagine.
'You are alone, absolutely alone. This has to be understood very clearly. The moment a person becomes conscious, he becomes alone. The greater the consciousness, the greater the awareness that you are alone. So, do not escape from this fact through society, friends, associations, crowds. Do not escape from it! It is a great phenomenon. The whole process of evolution has been working toward this. Consciousness has come to the point now where you know that you are alone. And only in aloneness you can attain enlightenment.'
OSHO - The Psychology of the Esoteric
PRAYAN - NATURAL EXPRESSION OF YOUR POWER IN THE VIDEO ON THE SIDE
Photography by Pratibha
GO IN-DEPTH ABOUT THIS EPISODE HERE
READ THE FOLLOWING EPISODE HERE
DO YOU HAVE A FRIEND WHO TRAVELS IN PAIN? SHARE USING THE BUTTONS BELOW, HERE